A blast out around the countryside

It was a sunny and fresh Saturday, starting in London and ending at the Ye Olde Fighting Cocks pub next to the Roman Walls in the heart of St Albans.

I had arranged to meet with a friend and someone I had met through The Weekly Ride, at the Bikeshed and join other weekly ‘rideouters’ on whatever route had been planned this week.

Bikeshed is never empty, with groups sitting outside under the arches, chatting, eating, drinking, and smoking.

Having caught up with Miguel we then commenced the infamous ‘search for fellow weekly riders’ hoping to see obvious tell-tale signs of potential riders (non-alcoholic drinks, discussions of routes, the obvious itch to ride).  Anxious to set off and realising that Miguel and I may be the two members for today, we planned to sit and have a quick drink then head out. Sitting there we got chatting to a few other people who had decided to come along.

As none of us had been there before and as it didn’t seem so far away, we chose to ride to St Albans, not knowing what we would find or what the ride would entail. Having not led a ride before, I was grateful to be leading only a few other riders, all of whom were keen and able.

So we dipped a knee in the breeze and headed north deciding to stick to the A roads hoping to enjoy the sites  on route to St Albans. As there was only a few of us we were able to stay together through the tight roads and hazards of high streets and residential areas between Haringay and Barnet. Progress was slow but steady, as we all got the chance to practice our brakes and observations, chatting at red lights as we passed through these many small towns. We eventually reached the A1(M) toward Welham Green and south Hatfield where we were able to twist our wrists and enjoy a little speed we were all secretly itching for before turning off towards St Albans.

We arrived in St Albans and scooted to the Roman Walls located by the water. Heading down under the ancient arches and over the cobbled streets of the old parts of town, we pulled up right (as if planned) by the Ye Olde Fighting Cocks pub and enjoyed a well-earned pint and a bowl of chips in the large beer garden, sharing our stories about our bikes, VW camper-vans, life, and work.

Due to time constraints, and wanting a change from the stop-start A roads we had endured on the way in to St Albans, we decided to take the M1 back towards the Bikeshed. Heading south, we stared down a beautifully barren M1 devoid of four wheeled obstacles. Gliding from lane to lane creating long shadows from the setting sun, we took turns to shoot into the right hand lane, dip our heads, and scare ourselves at the power of our engines.

One of the guys took a turn off early and headed home to west London. Being instructed by the sat nav we reluctantly left the M1 and back onto the A roads. Needless to say, we were back into London before we knew it, slowly working our way to the Bikeshed.

Once there we had a quick bite, discussed the route, and parted ways, looking forward to the next one. 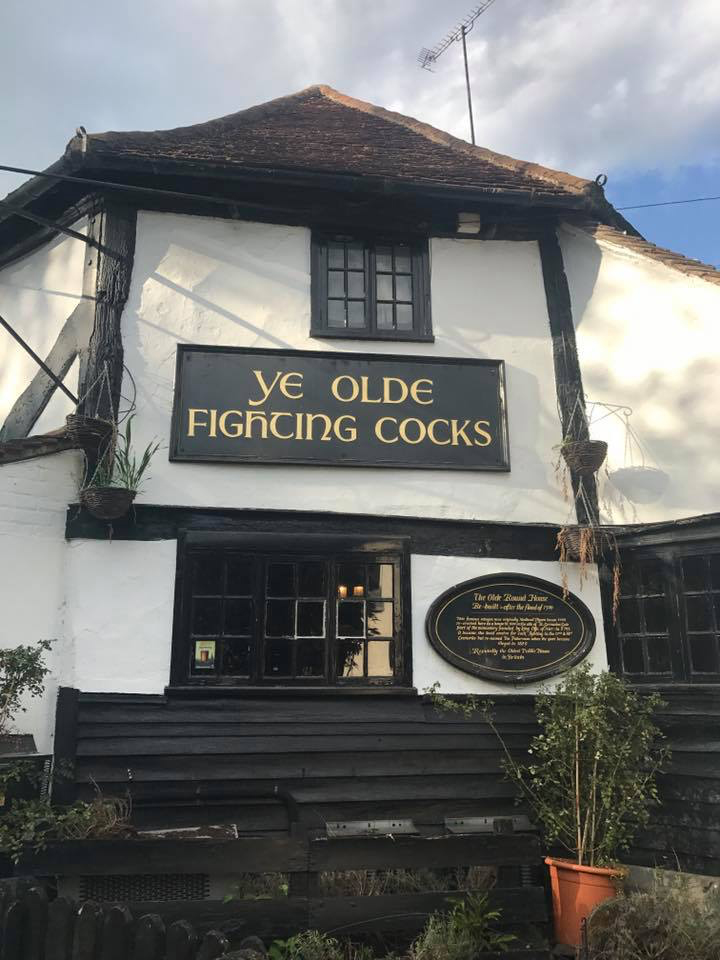 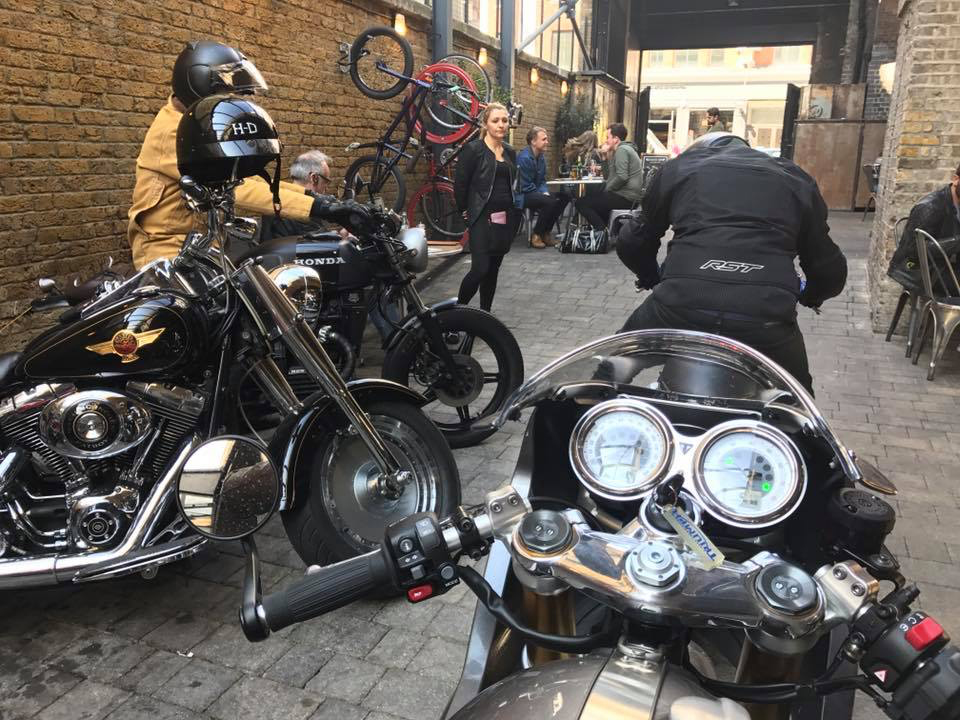 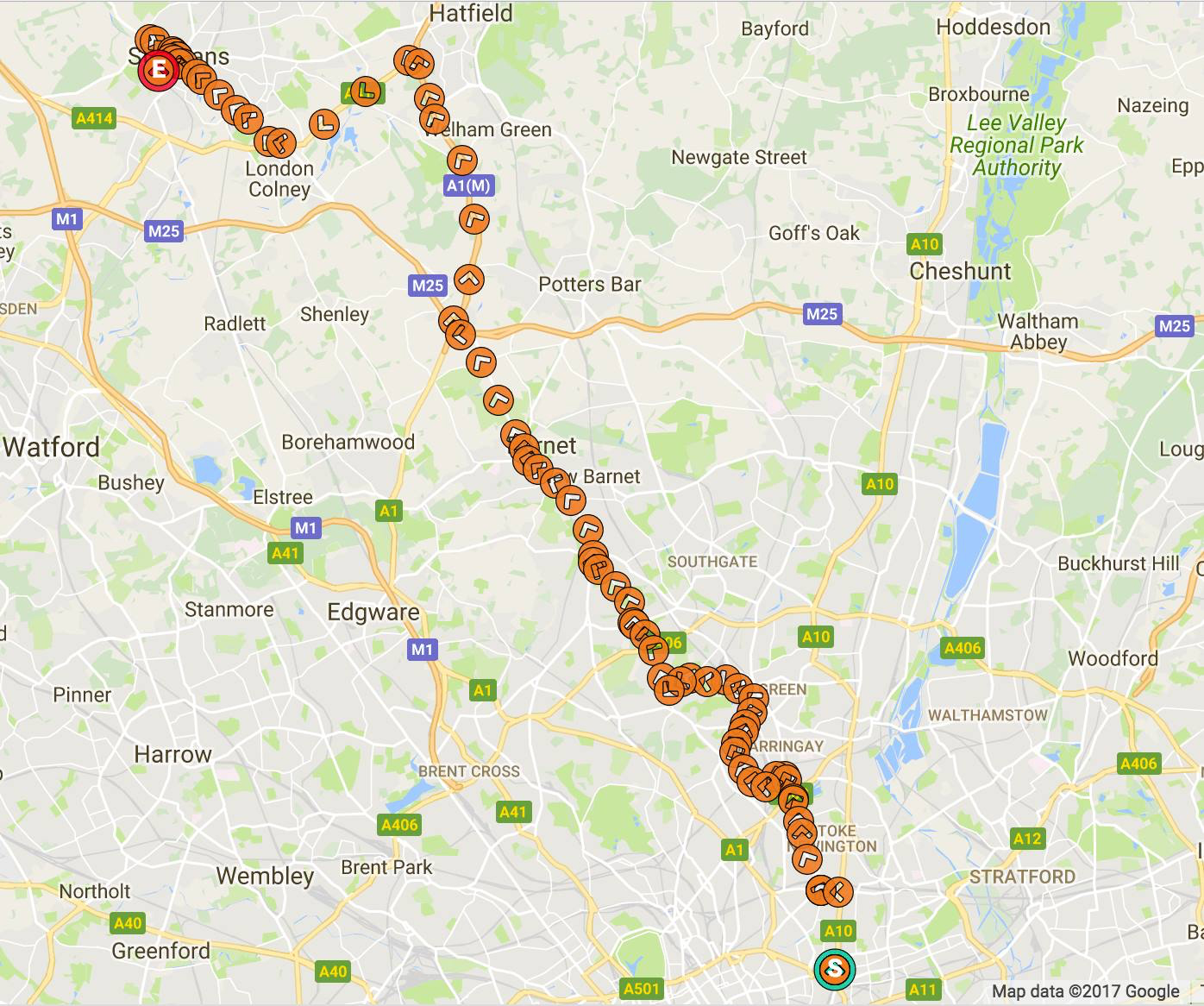