So this weeks ride was an early start! Another bank holiday weekend, meant for me, a busy weekend and an early start was my only way of getting in my weekly fix.

We meet at the Bike Shed and as it was early, breakfast was definitely on the menu! I knew it would be a small turn out, as not many had said they could make it, but for me it doesn’t matter if it’s just me and one other. In the end it was five of us that rode out. As I said breakfast and coffee’s were consumed, there was no real rush so the conversation flowed. One of the guys had come up from Kent, a fair old trip and I was surprised he fancied going out again, but he had a lovely Triumph and I would be riding that as much as I can if it was mine. It was also nice to see Fabio who I had meet on another Weekly Ride and it was great to meet the other new faces.

We discussed routes, someone had to be back at the Bike Shed at Midday, I had been doing a bit of research, the last few I had been on we had gone East, so I wanted a change as much as anything. We spoke about various ideas then we settled on heading North. We thought we could head out of town on the A10 and basically turn left at Enfield out into the country side and heading towards Potters Bar.

The weather was dry and the sun was doing its best, but there was a definite chill in the air. We rode out together whipping through Hoxton, Dalston, Stoke and into the heart of Harringey. I know that area well, so we dipped off the A10 and went around the houses to avoid the busy part of the A10 at Tottenham. I must say though that the traffic in and around London was very quiet, I suppose most sensible people are enjoying their Saturday mornings with a cup of tea and a the paper on the sofa!

After our little detour we continued along the A10 until we got to Enfield and then we just simply turned left. I was leading and I cant help but get a bit nervous that people are enjoying the ride and the route we had taken. With a brief look at the area on Google back at the Bike Shed, my general plan was that if I keep heading North West we would eventually hit those leafy green roads we all dream about it. Heading in one direction is not as easy as you think as the roads didn’t seem to bending to my will, but we started to feel the cleaner air, see the shades of green and the speed limit increased so we had made it.

We also agreed that it would be a good idea to stop somewhere for a drink, as I mentioned it was a bit chilly so something hot was on my mind. As we were now in the countryside and the speeds were ramped up a bit, that chilliness turned into cold (I had definitely under layered!) and the two cups of tea I had drunk back at the shed were playing heavy on my bladder (my bike is a bit of a bone shaker which never helps when a call of nature is needed). Then out of nowhere a little country pub popped up on the horizon.

We dived into the car park and parked up, we all agreed a warm drink and a toilet break was a good idea. We went over to the pub but it was closed, but the landlord saw us and said we could come in and use the facilities but they would only start serving in 10-15 minutes. It was a nice pub inside and out and we parked ourselves by the fireplace, ordered our hot beverages when the time was right and the conversation flowed. There was talk about clothes and fashion (motorcycle gear obviously), how often you wash your bike trousers and some of the strange customs and rules of living in Sweden.

We were conscious of time so we decided to head back towards the Shed, we had a little bit more of a blast around the lanes and again following my nose headed East to try and pick up the A10 again, we ended up going through Cockfosters, Southgate and Palmers Green, not exactly the way I wanted to go but it was all good. Then we blasted back down the A10. A nice ride out with nice people, which is what this is all about for me. 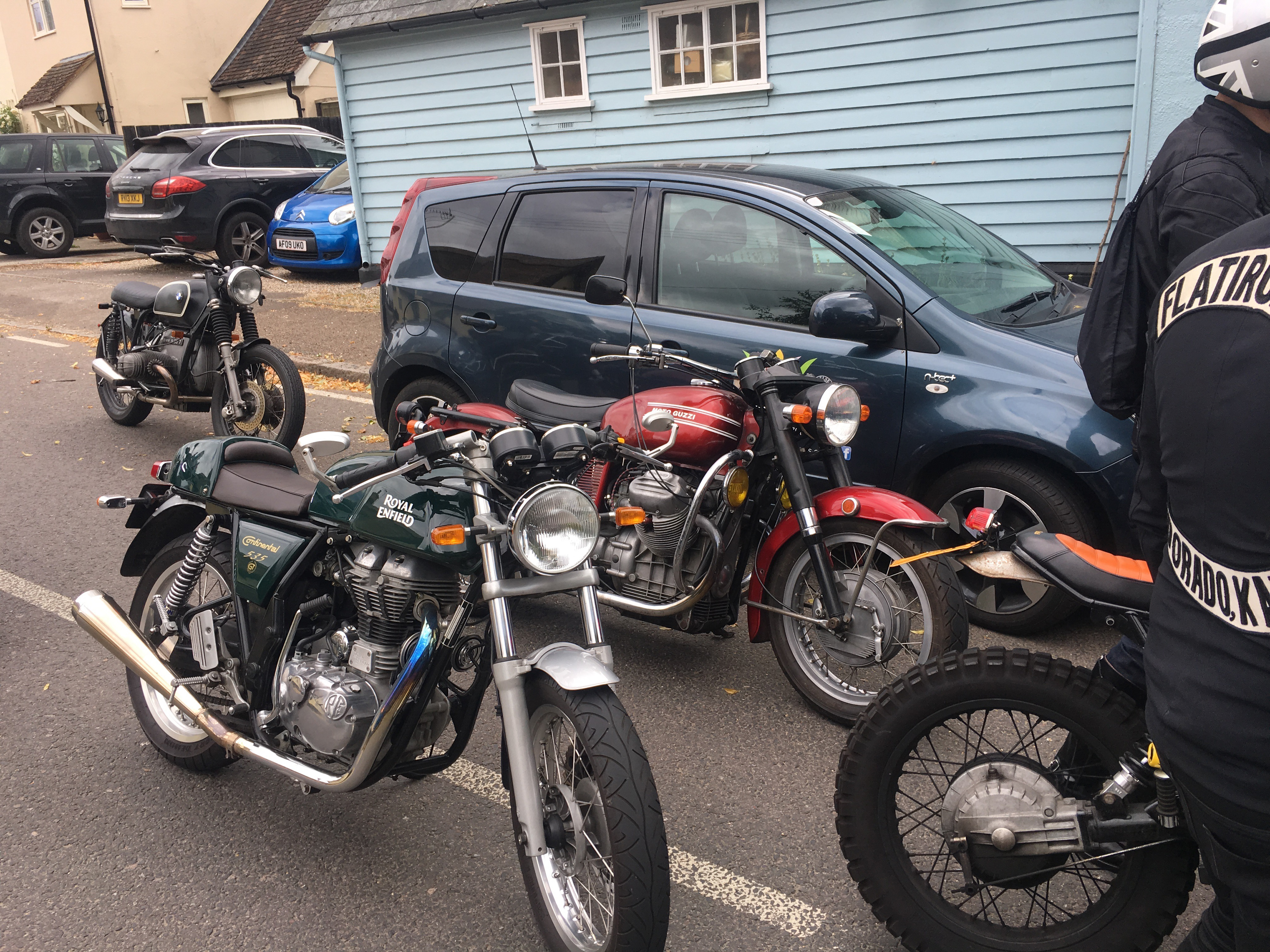